When you think of mushrooms, you likely picture them packaged and ready to purchase at your local grocery store. But some of the best and freshest mushrooms grow right here in Virginia. We strive to provide a "Forest to Table" experience unlike any other.

At Semper Fi Fungi, our mission is to bring you the freshest, best tasting, locally foraged mushrooms. Led by Patrick Roche, a Marine Veteran, I have been identifying and foraging throughout Northern Virginia since I was a kid. After my time in the Marine Corps, I completed my degree in microbiology and currenty one of two licensed mushroom foragers in the state of Virginia. What started out as a love of mushrooms and exploring the forests of Virginia has become a thriving foodie business, we offer a variety of mushrooms depending on the time of year.

Mushrooms are so much more than the heavily processed and packaged item in the grocery store. Mushroom benefits have been recorded since the 29th century B.C. The health benefits of fungi have continued to be studied, and many of the mushrooms first recorded in early texts are used today in supplements to promote health, from China’s reishi mushroom for its immune supporting properties, to Finland’s Chaga mushroom known to support antioxidant pathways. New uses are still being discovered today, from face cream to coffee, mushrooms are being used in a wide variety of products. They’re known as a traditional health remedy, and have been documented to help maintain vitality and overall well-being, there are specific mushrooms that can help support different benefits. Mushrooms are celebrated in many cultures, since there are over 2,000 species of edible mushrooms grown all around the world — from the common white button mushroom found in grocery stores to the exotic black trumpet and revered reishi from China. With so many varieties, it’s no wonder that they’ve found an important place in many different cultures around the world. 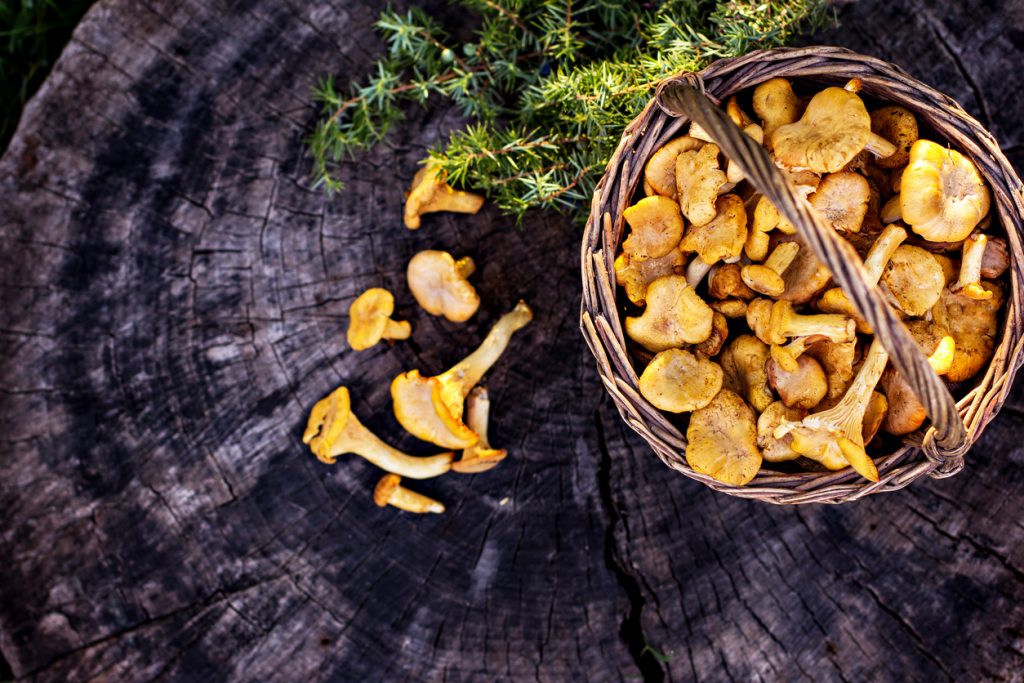 Also known as: Golden, yellow, chanterelle, egg mushroom, girolle, pfifferling
Chanterelles are among the most popular species of wild mushrooms. They are orange, yellow or white, meaty and trumpet-shaped. Because they’re difficult to cultivate, chanterelles are usually foraged in the wild.
They’re common in many European cuisines, including French and Austrian, and are also native to the United States. Some species have a fruity odor, others a more woody, earthy fragrance, and still others can even be considered spicy. They are delicate in flavor and texture, work well fried or sautéed in butter, oil or cream. You can use them as a starter topping, on bruschetta or you can combine them with eggs. They also go well in soufflés, cream sauces, soups, or pasta.

Also known as: Morchella
Out of all the mushroom types, these distinctive fungi have a honeycomb appearance on their cap. Morels are prized by gourmet cooks, particularly in French cuisine, because they are super savory and delicious.
Due to difficulties in cultivation, commercial harvesting of wild morels has become a multimillion-dollar industry in the temperate Northern Hemisphere, in particular in North America, Turkey, China, the Himalayas, India, and Pakistan, where these highly prized fungi are found in abundance.
One of the best and simplest ways to enjoy morels is by gently sautéeing them in butter, then season them with salt and pepper. They are a little chewy and taste great. Serve them with meat and poultry, or add them to soups, or in pasta fillings. 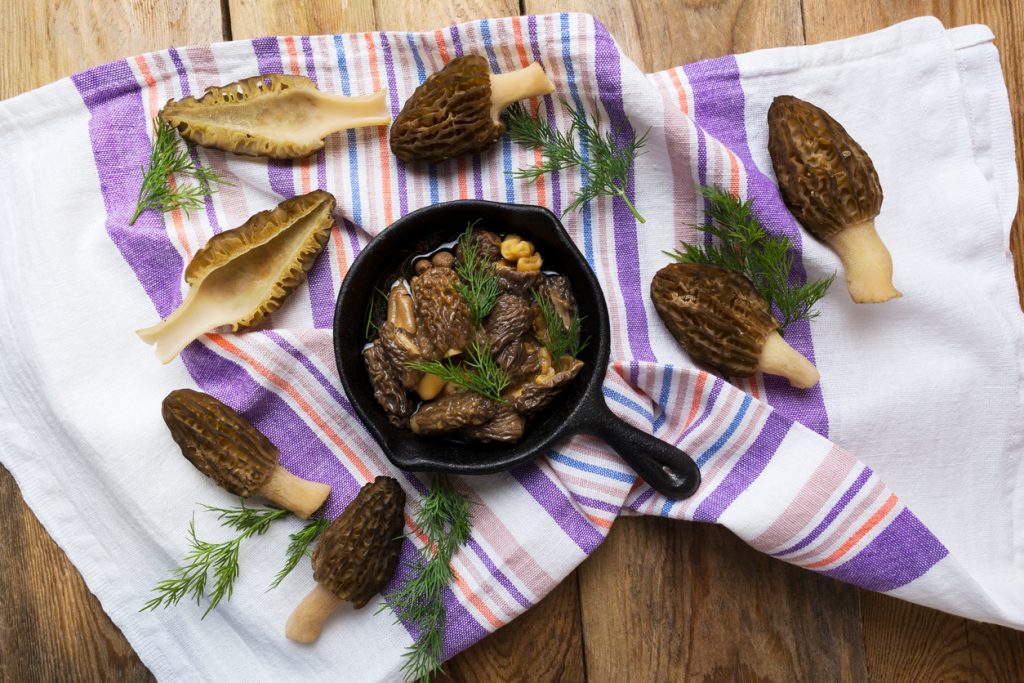 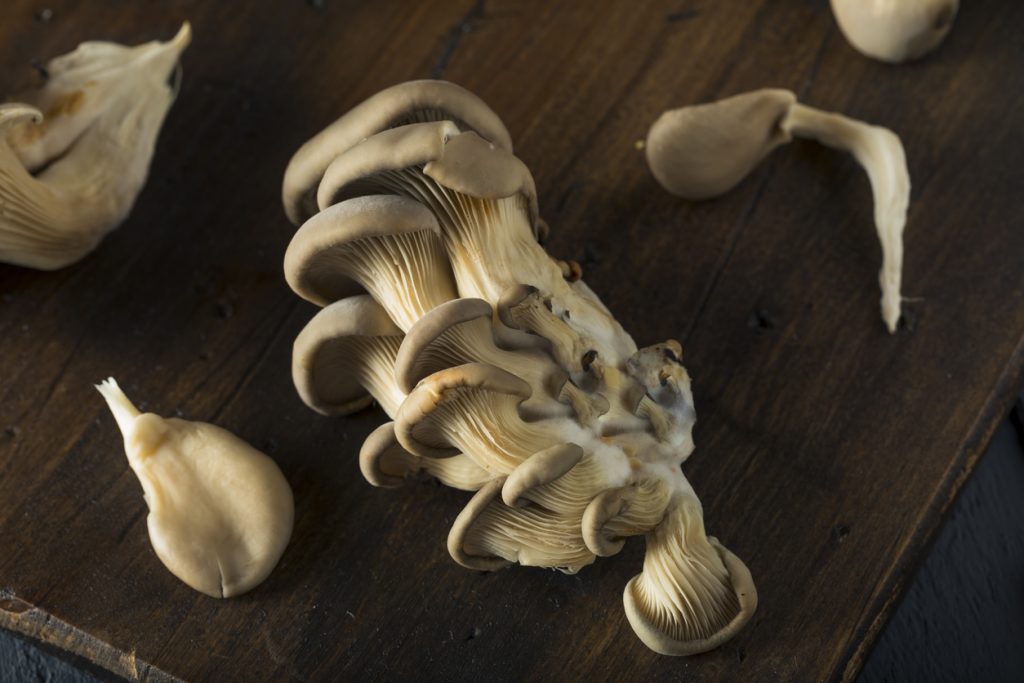 Also known as: Pleurotus, tree oyster, angel’s wings, pleurotte en huître, abalone mushroom
Oyster mushrooms are a species of Pleurotus and they can be found in the wild, growing on the sides of trees. Nowadays they’re some of the most commonly cultivated edible mushrooms in the world. The king trumpet mushroom is the largest species in the oyster mushroom genus.
They are simple to cook and offer a delicate and sweet flavor. They’re used especially in a stir-fry or sauté because they are consistently thin, and therefore will cook more evenly than other mushrooms.

A marinated mushroom salad is a refreshing way to enjoy mushrooms. But first, you'll need to simmer your mushrooms to soften them and prepare them for absorbing your marinade.

To simmer mushrooms, bring a large pot of water with 1 teaspoon of sea salt to a boil. Add 1 pound of cleaned mushrooms and lower heat to medium. Simmer for about 5 minutes, until mushrooms have softened then drain into a colander. Transfer mushrooms to a large bowl and set aside.

In a medium bowl, whisk together ¼ cup extra virgin olive oil, two tablespoons white wine vinegar, one minced garlic clove, ½ teaspoon Italian herbs, and ¼ teaspoon sea salt. Pour the marinade into the bowl with mushrooms and mix until mushrooms are fully coated. Cover and allow to marinate for at least two hours in the refrigerator.

In the beginning stages of cooking, the mushrooms will release moisture, and a sizzling sound will occur. Browning will begin after the moisture is released so be sure to stir them frequently during this time. Once mushrooms are lightly crisped and browned around the edges, they are ready to serve.

Looking for ways to enjoy mushrooms and want some ideas on what goes well with mushrooms? We have lots of different flavour pairing ideas for you to try and experiment with.

Where can you find me!

Saturdays: Spring through fall I will be at the Fredericksburg Farmers Market.

Sundays: Spring through the end of the season I will be at the Dale City Farmers Market.
Can't make it to one of the Famers Market? Email me and I'll see what I can do.

Want to go on a foraging adventure?

I offer guided mushroom foraging adventures in the abundant forests of Virginia. Enjoy the beautiful outdoors of Virginia while learning how to identify and where to look for wild mushrooms. Email me to book your adventure!